The impact of team diversity on your business

Diversity can mean many different things but, for organizations, it usually means being populated by people with differences and acknowledging, accepting, and valuing those differences. These differences can be in terms of “age, class, race, ethnicity, gender, disabilities, etc.” (Workplace Diversity, by Esty, et al.). The differences can also include political leanings, backgrounds (types of organizations employees previously worked in, their educational background, etc.), and religion. Geography can also be taken into account, especially if you employ remote workers.

There’s also the case for having a diverse pool of talent with different personality, thinking, and communication styles, which is where personality tests including the controversial Myers-Briggs test come in. Recruiters tend to have a bias for people who are similar to themselves, which might lead them to miss out on people with different working approaches and communication styles who might actually be a good addition to the company.

It’s not just about the numbers

Does this mean that all companies should have some kind of ratio or quota they have to fill when staffing? Not exactly. In fact, this quota-based thinking tends to be simplistic. At the very least, an organization’s staff should resemble the target audience and customers they are reaching out to. In the case of advertising and marketing, this means resembling the general population that your clients and campaigns want to reach. At the same time, companies shouldn’t be afraid of hiring outsiders even if they don’t fit the mold of the majority of their current employees.

It’s also not enough to look at the gender, age, ethnic, and socio-cultural demographics of your staff. It’s important to look at equality in general. Here are some questions to consider if you want to probe whether you company is not just diverse, but a promoter of equality:

These are just a few of the questions that managers, executives, and HR professionals have to ask themselves when evaluating and improving diversity.

The benefits of diversity

But why should businesses and agencies look into improving diversity in the first place? What’s in it for them?

When it comes to innovation and creativity, diversity plays a major role. A six-year study of over 3,000 entrepreneurs and executives showed that the most innovative business leaders “go out of their way to meet people with different kinds of ideas and perspectives to extend their own knowledge domains.”

Diversity in expertise may offer obvious benefits, but the same can be said about social diversity— differences in race, ethnicity, gender, and sexual orientation. According to an article from Scientific American: “People who are different from one another in race, gender and other dimensions bring unique information and experiences to bear on the task at hand. A male and a female engineer might have perspectives as different from one another as an engineer and a physicist—and that is a good thing.”

This was certainly shown to be the case in science. Research published in the National Bureau of Economic Research suggests that “diversity in inputs by author ethnicity, location, and references leads to greater contributions to science as measured by impact factors and citations.”

In other words, a more diverse research team usually creates higher impact work than teams that are homogeneous.

Having a diverse pool of talent is especially important in industries and fields that depend on mass communication, such as television, film, radio, and the many different incarnations of advertising. Since a diverse agency will be better equipped to understand the nuances behind the experiences, culture, and history of each minority group, they can create more compelling work that appeals to different groups.

Advertisers are starting to realize the effect that inclusive campaigns can have. When Advertising Age covered the issue in 2014, they noted that after Chevrolet launched an ad campaign including interracial and LGBT couples, both the brand perception and purchase consideration skyrocketed among the LGBT community.

Still, there’s additional work has to be done if the industry wants to keep up with the pace of the general population. According to the Bureau of Labor Statistics, out of the 559,000 Americans employed in advertising, public relations, and related services, less than half are women. Only 5.3% of them identify as Black or African American and only 11.7% as Hispanic or Latino, compared to 13.2% and 17.4% of the overall population, per the the U.S. Census Bureau.

Diversity brings nuance and understanding. Lacking that, campaigns run the risk of coming across as pandering or, worse, completely prejudiced toward the consumers they are trying to sell to.

Diversity also ends up having an effect on the bottom line. A study from McKinsey and Co. shows that companies with top-level ethnic and gender diversity financially outperform those that are more homogeneous. 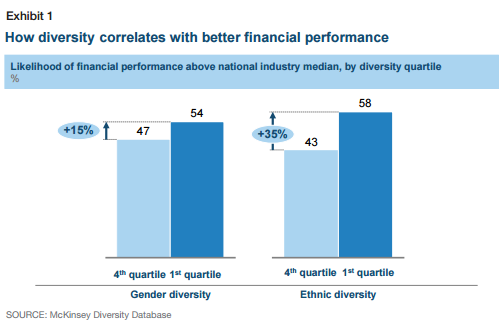 While they can’t necessarily prove that diversity directly affects financial performance, they found that increased diversity positively affected other aspects of the business, including “advantages in recruiting the best talent, stronger customer orientation, increased employee satisfaction, and improved decision making.” This combination of benefits led to increased performance.

Want a more diverse team? Here’s how to start.

If you think your company would benefit from building more diverse teams, it’s not enough to just choose from your existing staff and external applications. Sometimes, even when you’re trying to make an effort to attract candidates from different backgrounds, you could still end up with a homogeneous group. This is because opening your doors to a variety of people isn’t enough—there has to be an active effort to recruit from a diverse group of schools, communities, and organizations. Without this change in the funnel, decision-makers will often stick to the status quo, without realizing that they are doing it.

In an interview with The New York Times, comedian Trevor Noah talked about his initial attempts to hire more diverse talent for The Daily Show. Although Comedy Central, the network behind the show, sent out “all their tentacles,” Noah was surprised that the majority of the applicants were still white males.

To understand what happened, Noah sought out and talked to the comedians himself. He found that there was a major barrier to entry that the network’s gatekeepers didn’t take into account: They may have sent a casting call to all the agents and managers they could reach, but the network didn’t realize that most of the comedians who weren’t white males couldn’t get agents or managers in the first place.

“We can say we want diversity, but there’s this little roadblock that no one tells you about,” Noah said.

It’s possible that your industry, agency, and personal network could have these unconscious biases and unintentional barriers getting in the way of attracting a wide variety of talent. To overcome these barriers, you need to take some extra steps beyond calling for applications. Here are some things your agency can do.

One way to attract a diverse set of applicants is to deliberately open your pipeline for talent to other channels. When it comes to looking for people who don’t fit your company’s current mold, using your current employees’ networks and placing the usual job ads isn’t going to be enough. Reach out to different organizations who can help you navigate hiring a more diverse work force. Participate in job fairs in different communities where your company (or even your industry) doesn’t typically seek candidates.

Support your team through change

When it comes to embracing diversity, the most common solution that companies use is diversity training—but this type of training doesn’t really work to change attitudes. In the worst cases, as with sensitivity training, it can have negative effects on both the company and individual employees.

Research findings from a study of more than 800 companies, published by the American Sociological Association, showed that diversity training can have little or no positive effect in creating a more diverse management team. In fact, it can even invite backlash from employees who are concerned about diversity’s effects on their own careers. When training becomes mandatory or emphasizes diversity as part of legal compliance, there are even “negative effects on management diversity,” according to the study.

Formal mentoring programs typically don’t elicit the same level of backlash, in part because they are made available to all employees.

Another solution that shows promise is having specific individuals take responsibility for team diversity, whether it’s a taskforce or a manager. Not only can they identify problems, they can also propose and execute concrete fixes. According to the study, “Managers and taskforces feel accountable for change, and they monitor quarterly employment data to see if their efforts are paying off. If not, it is back to the drawing board to sketch new diversity strategies.”

The lesson here is that when it comes to improving diversity, hiring is just scratching the surface. By having programs that focus on the workplace concerns and career goals of all your employees, you’re providing a solid support system and making it available to everyone.

There are also special programs that agencies can participate in if they want to kickstart their efforts in improving and supporting diversity. In the UK, a program called The Great British Diversity Experiment was created by agency leaders to attract diverse talents from different marketing and tech companies. The participants will be formed into teams who will use “culture and code” to solve real business problems. It may sound like a one-off event, but this experiment will provide actionable findings and lessons that the rest of the industry can learn from. Their findings will be released in April.

The Advertising Club of New York also have their active i’mPART program, helping firms “Promote, Attract, Retain and Train multicultural talent.” The program is tracking diversity data from different firms for over a 10 year period, and finances programs that promote diversity in the industry. These programs range from supporting training programs such as the High School for Innovation in Advertising and Media and special events like ADCOLOR.

Given what we’ve covered so far, it’s clear that diversity isn’t a simple buzzword. Building a team consisting of people with a variety of backgrounds and expertise takes more work than just posting job ads. More inclusive business practices require more deliberate planning and action than just having a session or two of “diversity training.” Still, the benefits and ethics of having a more inclusive company culture is worth all the work.