How to change your creative team’s bad habits

As the old saying goes, “we become what we repeatedly do.” This means we must repeatedly do things that are constructive, useful, and lead us towards our goals. But, as any creature of habit knows, it’s not that easy to start new habits and break bad ones. We’ve covered breaking your own bad habits in previous posts, but breaking the bad habits of an entire group presents an even bigger challenge.

If you’re looking to change your team’s habits for the better, especially in a creative and collaborative setting, here are some of the most common bad habits of teams:

Domineering colleagues bulldozing their teammates, small problems escalating into major conflicts, team members gossiping and talking negatively behind each other’s backs… these are all signs that your collaborative efforts are being stifled by personality clashes. Here are other signs: 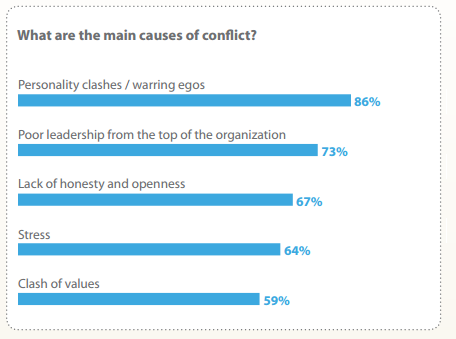 While differences and conflict are to be expected in any workplace— after all, only 0.8% of Canadian employees report having never experienced workplace conflict, with the majority of these conflicts coming from personality clashes (see above)—the conflict should not be so bad that it affects team cohesion and output. Since conflict is unavoidable at work, especially in projects that require a lot of collaboration, it’s often best to work through them rather than around them. Here are some suggestions:

Another bad habit common among creative teams is the uneven distribution of responsibilities and labor.

If you notice that the individual team members are putting in disproportionate amounts of work for similar tasks, you need to find a solution before your project deadlines are derailed and the more productive members feel overburdened. By making full use of each team member, you’ll benefit from their unique input. Here’s how to make that happen:

It’s easy to spot a team that communicates poorly. There’s usually a lot of back-and-forth messaging, with members asking the same questions over and over, or frequently requesting clarification on matters that have already been settled. More broadly, however, the symptoms of poor communication can be divided into the following:

We’ve previously covered some of the ways agencies can improve their communication, including understanding how master collaborators communicate, the best practices for interdepartmental collaboration, and how to avoid misunderstandings via email and text. To add to those resources, research from MIT’s Human Dynamics Laboratory showed that successful teams have several communication styles in common, including the following:

Take a look at how your team currently communicates and see if you can spot which of the techniques above aren’t being used to the fullest. Then, work on that to improve how your team members deliver and interpret information.

When bad habits become deeply ingrained in a team’s culture, the team becomes less committed and less cohesive. You’ll recognize a deep-seated habit when you notice the following issues recurring:

If you’re leading a creative team, the above symptoms make it more difficult as you try to lead a team that doesn’t want to be one. Even if you personally have a strong vision for a project or campaign, its execution will be slow and problematic—everyone involved will feel drudgery when it comes to doing their work, especially if they have to do collaborate with the rest of the team.

To encourage better group cohesion, you can try the following solutions:

The best way to fix bad habits is to prevent bad habits. Taking a more preventative approach might require more attention or caution, but given the situations above, it’s simpler than trying to cure a problem that’s deeply ingrained in a group of people. Be more proactive in spotting problem situations so that they are quickly addressed and solved before they become “business as usual.”