How to use the buddy system for greater productivity How to use the buddy system for greater productivity

“Two heads are better than one” is only a cliché because the examples are so common: Sergey Brin and Larry Page, Lennon and McCartney, Jerry Seinfeld and Larry David, James Watson and Francis Crick, and so on. Even the marketing industry is full of “dynamic duo” examples. For example, Business Insider’s list of the most creative people in advertising contains several partners, and Adweek devoted a feature to the leading duos in digital marketing.

Why does this work arrangement work so well?

The power of working in pairs

Working in pairs offers many potential advantages, but these three benefits tend to matter the most in the workplace:

Have you ever looked at a challenge and felt that it was too much for you to handle? With a partner at work, you don’t have to tackle all of that by yourself.

In a study published in the Journal of Experimental Social Psychology, researchers found something interesting about how our perception shifts when we’re provided with social support:

In both cases, the closer and the longer the relationship between the two parties, the less steep the hill appeared to be. In other words, having a partner around, especially one that you have a close working relationship with, can help make that mountain seem more like a molehill.

#2 – You can generate more creative ideas.

Sometimes, finding a collaborator can start with something as simple as needing a sounding board. But why does this approach tend to work? It’s because of psychological distance.

Here’s what happens: when something is psychologically distant, it’s something that’s outside your immediate and direct experience of reality. Research from Indiana University tells us that when a creative task appears to be originated from some place farther away, you can come up with more creative solutions. This is why having a sounding board can be crucial to creativity; since your collaborators are not personally encountering your specific creative task, they can easily distance themselves and approach it from more creative angles. The research implies that your partner can even introduce more creative ideas if you’re working remotely with each other.

#3 – Work output is better and faster.

This benefit is most evident in pair programming, a software programming technique where two programmers work on the same code at the same time. One acts as the driver, writing the code, while the other acts as a navigator who checks it in real time. In most cases, pairs use the same workstation but, with the help of cloud software, pair programming can also be done remotely. According to research published in the IEEE Software journal, the pair programming approach leads to a higher quality output – plus, projects tend to be completed faster, as illustrated by this chart comparing their completion times: 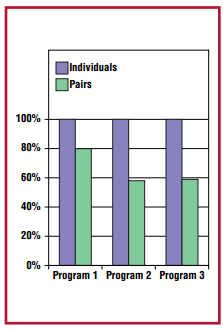 But it’s not just programming accuracy that benefits from pair work, even grammatical accuracy improves when working with someone who can look over your work in real time.

The formula for an unstoppable work partnership

While the benefits of pair work might seem remarkable, anyone who’s ever worked within an organization or group knows that you can’t get these benefits just by virtue of working with someone else. Finding and keeping the right person is key.

What should you look out for when seeking an ideal partner?

A comprehensive study on teamwork shows that having clearly defined roles within your team – even if it’s just a team of two – is essential, especially in times of change. In the pair programming example, this is why it’s essential to designate from the start who will be the driver (the one executing the task) and who will be the navigator (the one who double-checks and provides guidance).

The first thing that comes to mind when we’re looking for someone to work with is to check out their qualifications. Are they competent? What have they accomplished in the past? Which skills do they have? But this qualifications-based approach isn’t enough to maximize the power of the working partnership. Social skills also matter, according to research published in Science magazine. The research showed that a group’s ability to perform well on tasks has more to do with the members’ social sensitivity and conversational turn-taking rather than individual intelligence.

#3 – You’re only as trustworthy as your partner – and vice versa.

You’re only as trustworthy as the people around you, according to research published in Group Dynamics in 2009. From the study, “[P]erceptions of team trust are indeed lower than the average ratings of individual trust and are statistically equivalent to the least trusted member.” So if your partner is known to be not trustworthy, this can greatly affect how trustworthy you appear to others, and can hamper your efforts when it comes to bargaining and negotiating with other groups or individuals.

It’s also important to look beyond people with the same background and culture as you do, so that you can have different experiences and perspectives to draw from. Collaborating with someone from a different cultural background – and even a different location – is an important source of creativity.

Whom you work with is important, but how you work also makes a difference. For example, if you and your partner work within an organization that doesn’t give you enough autonomy, you might be at a disadvantage. Two studies have shown that pairs were more cognitively attuned, encouraging, and performed more effectively when they were given a lot of autonomy in how they approached the task.

It takes one to get things done, two to make it better

“Committees can criticize advertisements, but they should never be allowed to create them,” wrote legendary ad man David Ogilvy. But it’s hard to argue against the proven benefits of working with a partner. Having a single trusted colleague working closely with you seems to be the happy solution between trying to accomplish your creative tasks alone and not being pulled in too many different directions.