Would it help your team if you banned email?

Given how much people complain about email overload and how many people proclaim “Inbox Zero” relief each Friday on social media, it’s easy to end up thinking that email is the worst part of a typical office job.

While that might be an exaggeration, it’s not far off. A study on work-related emails found that what workers find most frustrating about email communication are: too many back and forth replies, receiving emails when in-person or phone communication is more appropriate, and unclear emails. Other common email pet peeves include how difficult it is to collaborate and file share over email. According to an article from The Atlantic, it’s email checking, rather than email writing, that is most stressful—and yet, on average, people check email 77 times per day. 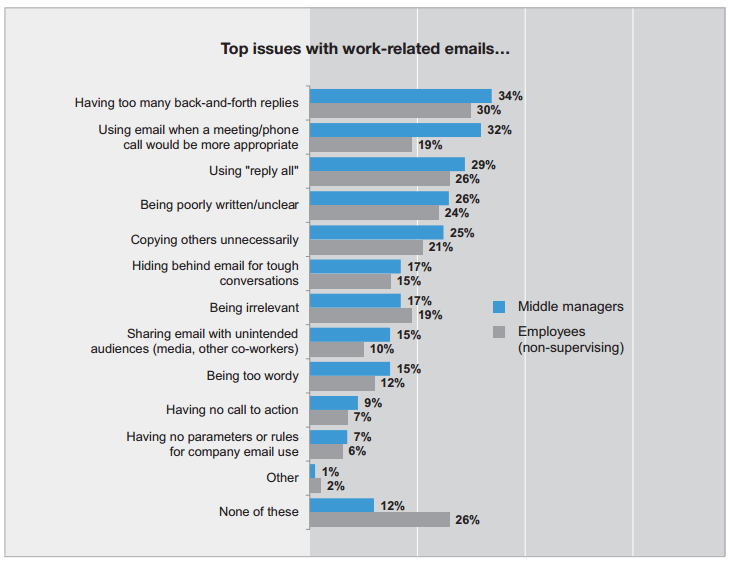 Because of the burden that comes with managing and sending emails, it’s no surprise that some companies have turned to a seemingly drastic solution: Banning email altogether.

The companies that dared to ban email

When companies ban email, the ban comes in many different forms, such as:

One company that has banned all internal emails is Atomic 212, an advertising agency with 50 employees. According to an article from Gizmodo Australia, the agency had one transition week to implement the ban and had to create guidelines so that the staff wouldn’t simply replace email with instant messaging. Instead, communication had to take place via phone calls or face-to-face. Task assignments and file sharing were handled through a to-do list app and Dropbox.

But not all companies take such a drastic approach to relieving their workforce of unnecessary emails. An Italian textiles company, Gabel, hired some experts to look into their workers’ concerns. They found that internal emails was their major complaint. As an experiment, management assigned a week last November for the entire company to go email-free for a week, suggesting that their employees opt for more direct contact. This was a temporary breather to see how their work processes would be affected without email. Gabel’s company president Michele Moltrasio told the BBC, “Even if from next week we all go back to using email, these days of experimentation are very worthwhile, to understand and rethink the methods and pace of working,”

Temporary email bans can also be part of your company’s regular schedule, just like what Van Meter, an electric-parts distributor, practices. According to a report from the BBC, Van Meter doesn’t allow internal emails during the weekends and during 5:00 p.m. to 7:00 a.m. during the weekdays. If any of the staff works evenings, they have to wait until the following morning to send internal emails.

The idea of banning work email outside working hours is also common in France, which recognizes employees’ “right of disconnecting”, where workers won’t face any negative consequences if they don’t check their work emails outside of working hours.

If it’s more difficult to implement company-wide email bans, you can start on your own, whether it’s individually or through your team. John Olson, CEO of Graystone Industries, a supplier of pond and aquarium equipment, doesn’t use or check email during Thursdays. Instead, he spends this email-free day working on higher-level projects for the company. According to an article on Fast Company: “Generally it’s the slowest day of the week for me,” [Olson] says. “My associates may continue to email but they know they will not receive a reply on any email directed to me.”

As far as the above companies are concerned, email bans have had their benefits.

For advertising agency Atomic 212, their ban on all internal emails improved both professional courtesy and productivity. Since email allows workers to send each other assignments and requests without asking, Atomic 212 CEO Jason Dooris told Gizmodo Australia that this affects professionalism, “It’s not professional and doesn’t get a good result. Professional discourtesy is rife in business and it’s often done unintentionally.” With the email ban in place, this type of discourtesy no longer happens.

Plus, Dooris estimates a “38-42 percent increase in productivity” since the ban. Now, they’re starting to get their clients to cease using email with them as well.

As for Van Meter, which discourages employees from checking and sending work emails outside office hours, employees report having better work-life balance, which is now ingrained into company culture.

These results are unsurprising given what we know of how people are affected by constant email access. A study from the University of California, Irvine claims that reducing access to work email helps employees focus better and reduce stress. According to the press release for the study, “People who read email changed screens twice as often and were in a steady “high alert” state, with more constant heart rates. Those removed from email for five days experienced more natural, variable heart rates.”

This “high alert” state isn’t confined to just email, however. A study published in the Journal of Occupational Health Psychology found that “workplace telepressure,” the urge to respond quickly to workplace messages from clients, colleagues, and supervisors, was a predictor of burnout, absenteeism, and poor sleep quality. This just goes to show us that instant, round-the-clock workplace communication takes its toll not just on employee health and happiness, but also on the culture and performance of a business. Though email seems to be one of the primary causes of workplace telepressure, we also have to look out for other channels where we feel the professional pressure to respond quickly, including social media and instant messaging.

Though email bans can make quick positive changes, they aren’t enough. We have to make other important changes in our approach to workplace communication.

If ever there was a speaker for the email ban movement, that would be entrepreneur, author and Collabosphere alum Claire Haidar, who has pioneered movements like “No Email Week”. Burge has abolished email use not just within her companies, but she also uses email minimally in her life. This change has allowed her to reclaim an extra 3 hours to her day. Via an article at 99u, Burge classifies her client communication into three different categories:

Consider these three categories of communication and how they apply to your team or company. Which category should go where? Is it better to carry your daily discussions via phone, instant messaging, or in-person? Should important information be easily searchable and indexed using a project management tool? Where do actionable items go? Figure out the processes that your company or team is already using for these situations, and see if there’s a way to offload them into more efficient systems rather than letting them clog up everybody’s inboxes. In other words, get rid of the “email as default” mindset.

It might also help to actively improve your team’s overall communication skills. After all, the problems that come with email aren’t exclusively email problems. If a colleague has a tendency to send vague emails with no next actions, this bad habit will likely carry over to other tools. There are some ways to avoid that.

Atos, a digital services firm, has had a Zero Email initiative since 2011, aiming to eliminate email use and shift communication to enterprise social networking and collaboration tools instead. Rather than just eliminate emails, Atos’ approach drove company leadership to lead by example, conducted formal training programs, created a plan “on which forms of communication and collaboration to push”, and invested in tracking communication metrics. This allowed them to see that after two years of implementing their Zero Email initiative, there was at least a 60 percent reduction in internal emails.

If you want to enforce a successful email ban, it won’t hurt to be as thorough as Atos. Make sure your ban includes planning your team’s communication options, training them in being clearer communicators, and tracking the right metrics so you can tell how an email ban or other changes in communication are affecting your team.

Just because email bans tend to work, does this mean we have to get rid of email completely? It’s usually not that simple. It’s still a widely used medium, of course, and email is still very effective for certain things, like connecting with colleagues and clients who aren’t very tech-savvy, or initiating low-pressure communication with an external party.

Sure, email can cause a lot of distraction and frustration, but there are also times when it comes in handy. What’s important is that people—and their organizations as a whole—understand when email works best, how to use it well, and when to avoid it altogether.