Who doesn’t want to be more creative? When done right, a jolt of creativity can produce award-winning work, foster innovation, and solve critical problems.

Despite the importance of creativity in both the workplace and life, most people are still unaware of how to cultivate it. The good news is that we’re learning more about how creativity works. Though most of it is still mysterious, psychologists and neuroscientists from all over the world have uncovered some basic things that can help you jump-start your creativity at work.

One way to get your creativity going is to develop psychological distance from the problem you’re trying to solve. Basically, this means re-framing the problem in such a way that it’s as if it is happening elsewhere or in the distant future.

In a series of experiments (Jia, et. al., 2009), researchers from Indiana University asked subjects to perform creative tasks. These tasks were brain teasers, such as the one below, in which subjects were asked to make the triangle point downward by moving only three circles. 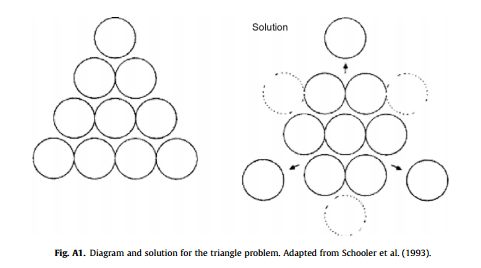 So if you’re stumped for creative ideas, try to picture the problem as something that’s occurring somewhere else in the distant future – it might help grant you the objectivity needed to come up with more solutions.

We often think of creativity as a solitary effort but, sometimes, it has to be a social one. Many historical creative figures sought out other people’s company for feedback and discussion. For example, Vincent Van Gogh exchanged letters with Paul Gauguin, and even invited him to stay at his house in Arles so that they could paint together and discuss art. Writer Ernest Hemingway discussed his work with mentors and peers such as Gertrude Stein and F. Scott Fitzgerald.

What these artists knew intuitively – that seeking creative company can give you additional insight – turns out to be true. Researchers from the University of California looked through several intensive studies on collective creativity. They found that working with others can help individuals find creative solutions from other people’s insights and experiences.

When facing a creative or mental block, our first instinct is often to keep working at it until something gives – but that’s not always the best conditions for creative solutions to pop up.

One alternative approach is to let your mind wander to other things. According to a study from Drexel University and Northwestern University, getting to the “eureka moment” or “Aha! moment” can happen when your brain is at rest or daydreaming. While more methodical methods focus on finding solutions from past assumptions and experiences, letting your mind roam can help you make associations from new information. 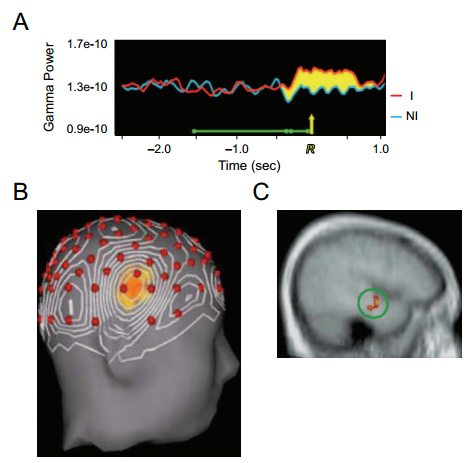 What the “Aha! Moment” looks like via EEG and fMRI scans (Kounios and Beeman, 2009)

Research also shows that even all-out daydreaming serves several functions (Schooler et. al., 2011), including future planning and learning enhancement. From the paper: “[T]he creative benefits of incubation intervals are greatest when individuals are occupied by a non-demanding task relative to either a demanding task or no task at all.”

Since daydreaming isn’t demanding, indulging in a bit of a daydream after a demanding task can help you experience some creative benefits.

But here’s the clincher, from another study (Zhong, et. al., 2009): daydreaming only works if you’ve already done some work on the problem in the first place. It shouldn’t be the first step to coming up with creative ideas.

#4. Take a break from the task

On a similar vein, you can take a break and work on other things. Researchers from the University of Sydney have found that even when you’re resting or working on something else, unconscious processes help improve productivity and creativity. 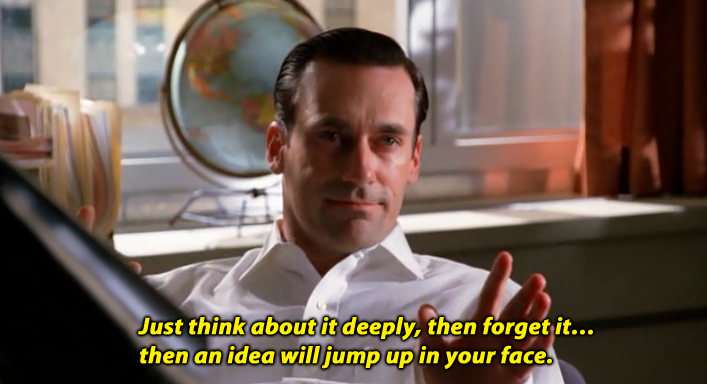 Research also shows that sleeping helps you enhance your insight, because your brain uses this time to consolidate recent memories and possibly help you reframe them easier. But, like daydreaming, you have to put in the work first.

#5. Experience things outside your comfort zone 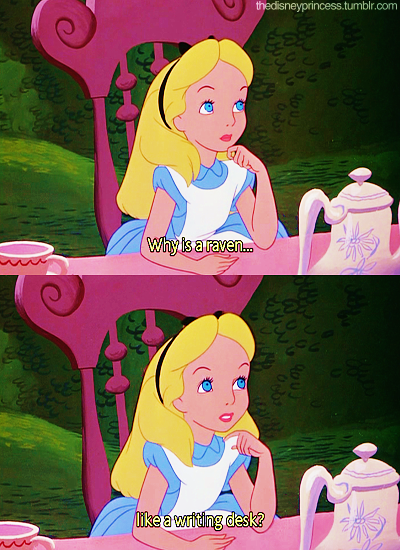 Travel is one way to do this, since experiencing other cultures can help you form and accept new ideas. Researchers from Singapore found that just being exposed to different cultures can also affect creativity. From their study: “exposure to multicultural experiences is positively related to the likelihood of engaging in some creativity-supporting processes—generation of unconventional ideas and receptiveness to ideas originated from foreign cultures.”

But if you’ve no room in your schedule for a multicultural experience, expose yourself to absurdism. According to a study from the University of California, Santa Barbara, even reading absurd stories like Kafka’s Metamorphosis helps people find and learn hidden patterns faster.

Finally, the key thing to remember is that there are no “wrong ideas” when you’re just brainstorming. Though we often think that structure and rigidity hinder creativity, research shows that it’s actually the fear of invalidity – the fear of being wrong – that blocks us from producing original ideas (Rietzschel, et. al., 2007).

Do the work first

The above tactics aren’t meant to be used as magical cures for any creative problem. What appears to be consistent from the above points is that we should do some preliminary work first, then step away from it. This is because creativity isn’t a one-step activity – there’s doing the hard work itself, incubating ideas, taking breaks, and coming back after we’ve reached our eureka moments. When we accept this, we’ll be more open to the experiences that really give us the fuel we need to fire up our latent creativity.